Persistent organic pollutants (POPs) are the group of chemicals which are highly resistant to degradation and are harmful to ecosystem and the human health. They either occur naturally or are the result of human activities. Most of the POPs are lipophilic. They can easily move through the food chain and dissolve in fats, so they tend to bio-accumulate in the fatty tissues of the organisms. They also tend to travel quite far from the place of origin and even are found in the places where they were never introduced.

POPs are halogenated organic compounds. POPs comprise of products that were in use in the past (some still are in use) such as insecticides, pesticides, additives in paints, heat exchange fluids in transformers and capacitors. Some are the by-products of high temperature processes, such as incomplete combustion and pesticide production. 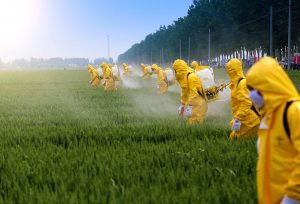 The United Nations Environment Programme (UNEP), in the year 1995 called for global action to be taken on POPs. It defined POPs as “chemical substances that persist in the environment, bio-accumulate through the food web, and pose a risk of causing adverse effects to human health and the environment”.The Stockholm Convention was adopted and put into practice by the United Nations Environment Programme (UNEP) on May 22, 2001 which aimed to restrict the production and use of persistent organic pollutants (POPs). It initially covered the 12 POPs of greatest concern, called the “dirty dozen:” aldrin, chlordane, DDT, dieldrin, dioxins, endrin, furans, heptachlor, hexachlorobenzene, mirex, PCBs, and toxaphene. As of 2019, there are 184 parties to the convention. The convention has banned the use and production of POPs in its participant countries.

Main route of exposure in human and animals are through food, air, or while growing in the womb. Many studies show that DDT one of the persistent organic pollutants is found in the breast milk. Many studies have shown that chronic low level exposure to the POPS makes one susceptible to various diseases. Majority of the POPs are known to disrupt normal functioning of the endocrine system. Studies have shown links between low dose exposure to POPs and reproductive health effects. Similarly, many studies have shown that POPs have been linked to cancer, impaired neurobehavioural and immune function, reduced sperm count.

COVID-19 and Suicide: A Crisis within a Crisis | 2 Facts Explained