Health is a fundamental right of every citizen. Constitution of Nepal recognizes LGBT rights as a fundamental right. Health is a holistic approach so healthy means people need to fit in physical, social and mental health too.  In case of LGBT, they are suffering from the various problem because of that they are not able to cope with their normal stresses of life. In this article I will explain Why LGBT Suffers From Mental Health Problem as my opinion. According to the American Psychiatric Association,

LGBT has mental disorder more than twice time higher than the heterosexual person in their lifetime. An estimated 264 million people are affected by depression which is the major mental illness in the world.

In case of LGBT, they experience 2.5 times more likely to have depression, anxiety and substance abuse compared to heterosexual individuals. 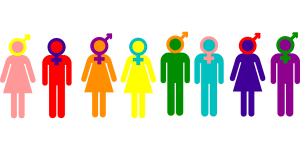 Recently I took a part in a Virtual Meeting conducted by Unity for change. Unity for change is such organization whose main objective is to empower and educate LGBT youth in Nepal. It mainly works for welfare of LGBT community and their rights. About 20 People participated in that meeting including Jamuna Shrestha, Psychiatric and Counselor. From that meeting I realized that they are suffering from Mental health problem in this COVID-19 lockdown period. One of them felt their future is uncertain, and have fear that if family will not support him in future. Some experienced frightening Nightmare and some have short temper and anger in this lockdown period. Dr. Jamuna Shrestha calmly counsels them with stories and example and invited them for further one to one counseling in her office.

Reason behind their Mental illness collides with Ignorance, fear and discrimination. They are bullied by society’s members once in their lifetime. Some of them use hormonal medicine or hormonal replacement therapy which may also secondary cause of their mental imbalances. The following are some reasons behind mental illness such as stress, depression and substance abuse in LGBT societies:

Nepal is one of the Patriarchal society. Here society defined people’s role and responsibilities in term of sex. LGBT have unique personality so that society started ignores them because they are different from their norms and values. Ignorance leads to make them feel alone and guilt and held towards mental illness.

The law of homosexuality (also mentioned third gender law) was legalized since 2007 and mentioned discrimination should be constitutionally prohibited. Despite of this law, it is only written in document but not effectively implemented in behavior.  There are many discrimination for them. They did not get job by their skills so they forcefully involved in other activity. That ultimately causes them mental illness.

As I mentioned earlier many LGBT have fear about their future. They have fear that what people think about me and my appearance. Fear is one of the part of stress and mental problems.  To overcome from this preventable mental illness, we human being create supportive and secure environment for them.

With this I would like to conclude my opinion on why LGBT Suffers From Mental Health Problem?

Sero-Epidemiology of COVID-19 in Kathmandu Valley |...